Due to Coronavirus pandemic, Waiting behind shuttered doors for normal life to resume is not new to people in Tamilnadu after the Coronavirus pandemic came into our lives. Lockdowns have existed long since and in different forms for different reasons: either to stop an epidemic becoming a pandemic or to fight against terrorism or technological disasters. Do you know we have a flashback with the lockdown that we are under now?? In 1902, there was a Plague that spread like wildfire, and thousands were isolated with the government restricting the public’s movement in and around the city. In 1918, it was Spanish flu and the necessary precautions to contain the spread carried out were thorough hand washing and physical distancing.

The Government Regulations is implementing the control measures to reduce the spread by comparing it with the similarities and differences from the precautions taken during a bygone era a century ago. During the Plague and Spanish flu, Bombay was the first Indian city to get affected and in 1896, the deadly plague killed lakhs of Indians. In the then Madras Presidency, 72,000 people died of the epidemic in the following 13 years. But despite the rudimentary medical infrastructure, Madras city reported 78 deaths. 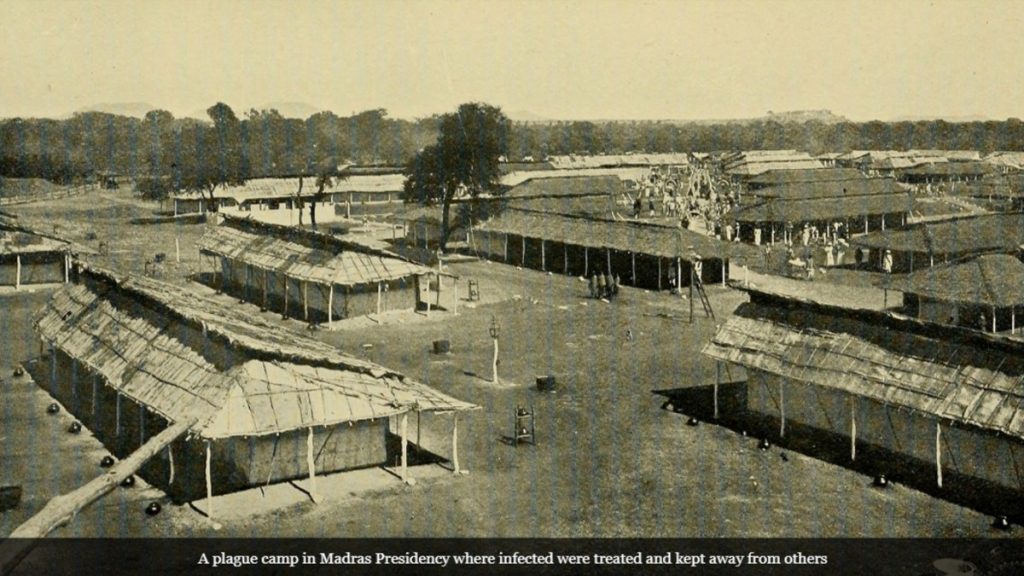 At that time medical reports and research papers were stringent enforcement of public health measures and favorable geographical and climatic conditions helped check the disease.

The first case of Plagues was reported in Madras in 1906 and the authorities framed rules to handle the incumbent danger. The disease was first reported at a village near Paracherry in North Madras. A dead rat thrown from the nearby Mauritius Fiji Emigration Depot caused the spread, said T S Ross, the health officer of Madras in 1906. The village was evacuated and government workers set it on fire to kill all the rats, but still, some of the rodents still managed to escape. As a result, Cassimode kuppam (Kasimedu) became the hotspot for the disease.

Similar to the rescue efforts for Covid-19, doctors and health officials isolated all the plague patients, suspected cases who might have come in contact with them, for at least 10 days at hospitals, plague camps, or at their houses. A local plague inspector’s manual shows that following isolation, houses, and in some cases entire colonies were vacated for disinfection, with occupants being handed special passes for relocation. People venturing out of infected areas were issued ‘Plague Passports’. Madras Port, Perambur, and Bitragunta (near Nellore in Andhra Pradesh) railway stations were primary screening and passport centers were passport holders were quarantined for 10 days.

Large-scale disinfection drives were carried out in localities, trains, and camps with Mercuric Chloride and Hydrochloric Acid procured from Madras Medical College (MMC). Timely intervention and support from institutions like MMC and The King Institute helped reduce fatalities with more than 12 lakh people being vaccinated in Madras Presidency between 1904 and 1905.

But it was not just the vaccine that did the job, but the volunteers and health department officials who patrolled streets and identified cases, while the police cracked down on violators of restricted movement and fined them ₹1,000 each. “Police officers were given powers to inquire into suspicious cases of plague,” Captain J Taylor, member of Plague Research Commission, said in his report.

Suspicious and confirmed cases were kept in isolation at hospitals, camps, and homes.

Plague passports were issued to people who came from infected areas to madras city.

Special passes were given for those selling food and fuel Spanish fuel.

10 to 20 million deaths due to Spanish flu in India, the largest number of fatalities in the world

The pandemic was believed to have originated from influenza-infected World War I troops returning home.

In Madras, cases were seen first in mid-September 1918 and the death rate was at 16.7%. The awareness about the disease was made in the stone age of technology through handmade stickers stuck outside every house with the message to stay at home. Prominently visible warning notices were posted outside infected buildings and owners of overcrowded structures were given 24 hours to vacate.

During this time, Social distancing was practiced and considered to be one of the most important strategies that were planned out. In a notification to the media in 1919, Corporation of Madras’ health officer, Dr. K Raghavendra Rao warned about the increase in the incidence of fever cases, which he explained was due to a “recrudescence of influenza”. Detailing the symptoms he asked people to be careful about fever with a little cold in the nose and slight cough. Advising the disinfection of items used by the infected person at home, he asked patients to be “isolated in an airy, well-ventilated room”.

According to a 2014 research paper, ‘The evolution of pandemic influenza: Evidence from India, 1918-19’ by Siddharth Chandra, the pandemic was believed to have originated from influenza-infected World War I troops returning home. There are reports about “isolation” relief homes that were set up to treat those with the flu, free of charges. Bombay, the Central Provinces, and parts of Madras were hit hardest, but the public followed the rules and the government worked to arrest the numbers helped battle the pandemic better. 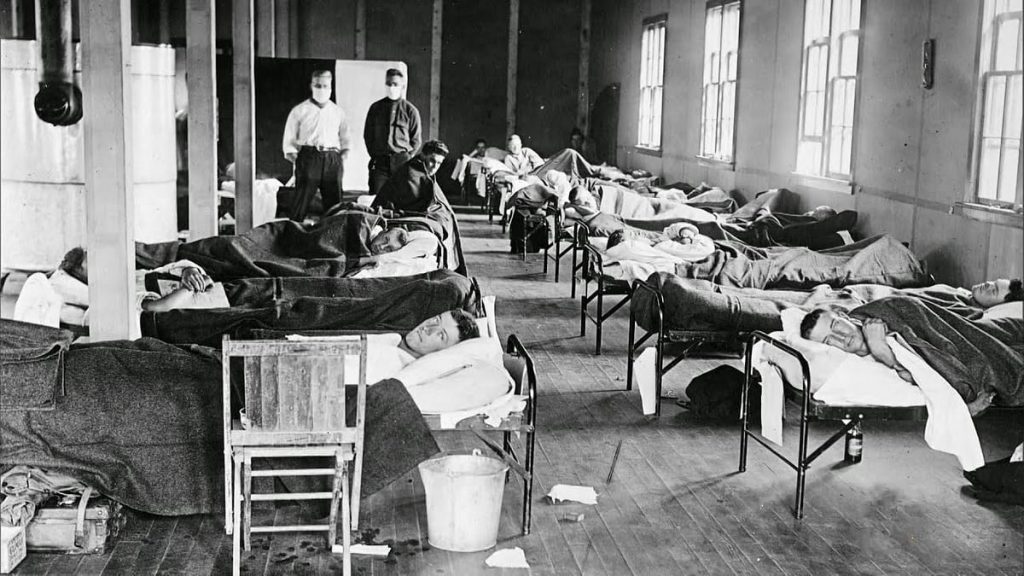 Also, some of the archived news revealed that the Indian Railways was the major culprit in spreading the Spanish flu throughout the country between 1918-19, which. The pandemic was also named the ‘greatest medical holocaust in history’ and the ‘mother of all pandemics’ that killed 10–20 million people in India alone, the worst-hit country in the world.
.

In June 1918, the Spanish influenza pandemic was first noted in Mumbai, chiefly among employees and mill workers, and by the end of June, it spread up to Chennai. During the panic caused by the epidemic, the trains were filled with migrants from infected centers traveling to their homes and many of them were ill. The first wave of the infection that began as an epidemic seemed to have only affected the elderly and children. 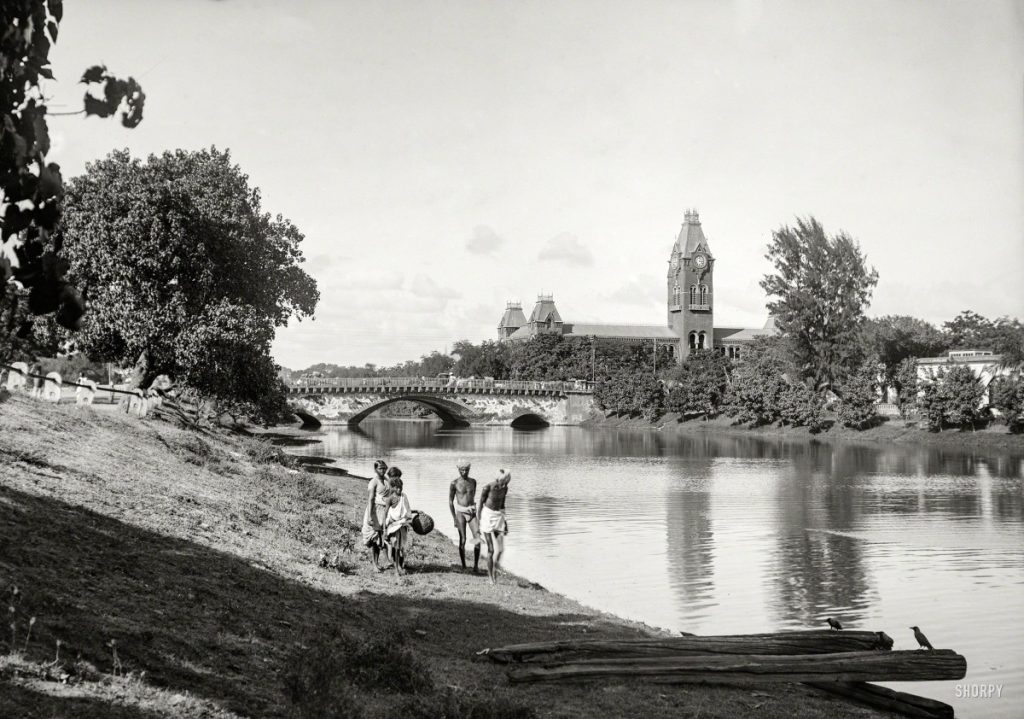 According to the 1911 Census, 23.3 crore people was the total population of then British India. The report had included death statistics available only till November 1918 and a staggering 12 to 13 million people died due to influenza between months of September and December at the time of writing the report, meaning data from all provinces was not available.

“Skepticism over getting infected by burning bodies, lack of cow dung cakes and wood to burn the dead, forced people to dump the bodies into Narbada river (Narmada river was then known as Narbada during the British period) in Madhya Pradesh, which eventually stopped boatmen to transport people across the river”, a letter sent by an officer in the report revealed. The officer reporting to the sanitary department of the then British India wrote that he saw bodies being dumped into the river brought in by carts, and crows sitting on highly decomposed bodies floating in the river. 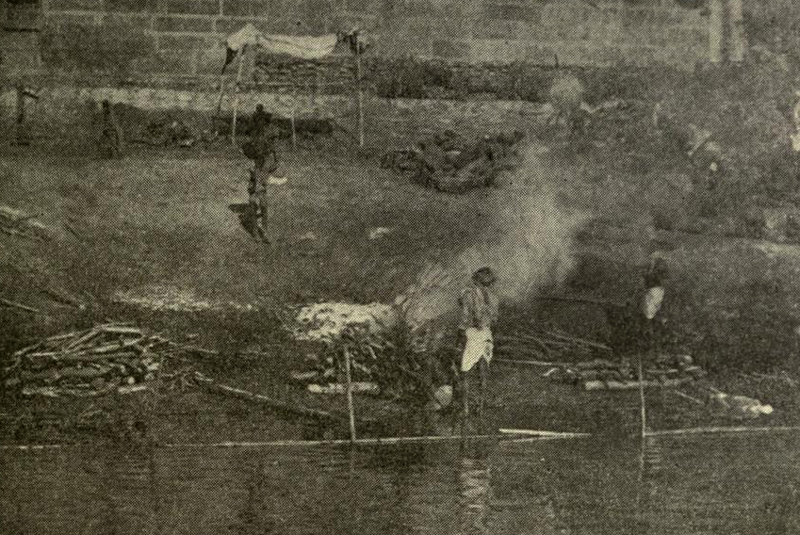 The death rate for the 1918 Spanish flu pandemic was exceptionally high, at over 20%. It is estimated that about 500 million people or one-third of the world’s population became infected with this virus. The number of deaths was estimated to be at least 50 million worldwide, with India accounting for almost a fifth of the global death toll. When the 1918 flu outbreak happened, antiviral flu drugs were not available at the time and the knowledge of influenza was very low that some believed that the pandemic was caused by bacteria – Bacillus influenza.

The COVID-19 crisis has led us to embrace new technologies to revitalize old social networks. As we begin to come to terms with the lockdown, it is important to understand the resources at our disposal for coping with enforced isolation.

History can assist with that task. It can give a sense of perspective on the experience of being alone. Solitude has only become a widespread and valued condition in the recent past. This gives some support to our capacity to endure the COVID-19 lockdown. At the same time, loneliness, which can be seen as failed solitude, may become a more serious threat to physical and mental well-being. That failure can be a state of mind, but more often is a consequence of social or institutional malfunctions over which the individual has little or no control. In the Coronavirus case too, so far, no vaccine is yet available. 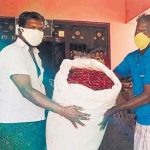 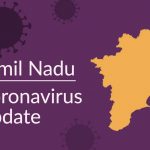 Erode : First District in TN to have no active...