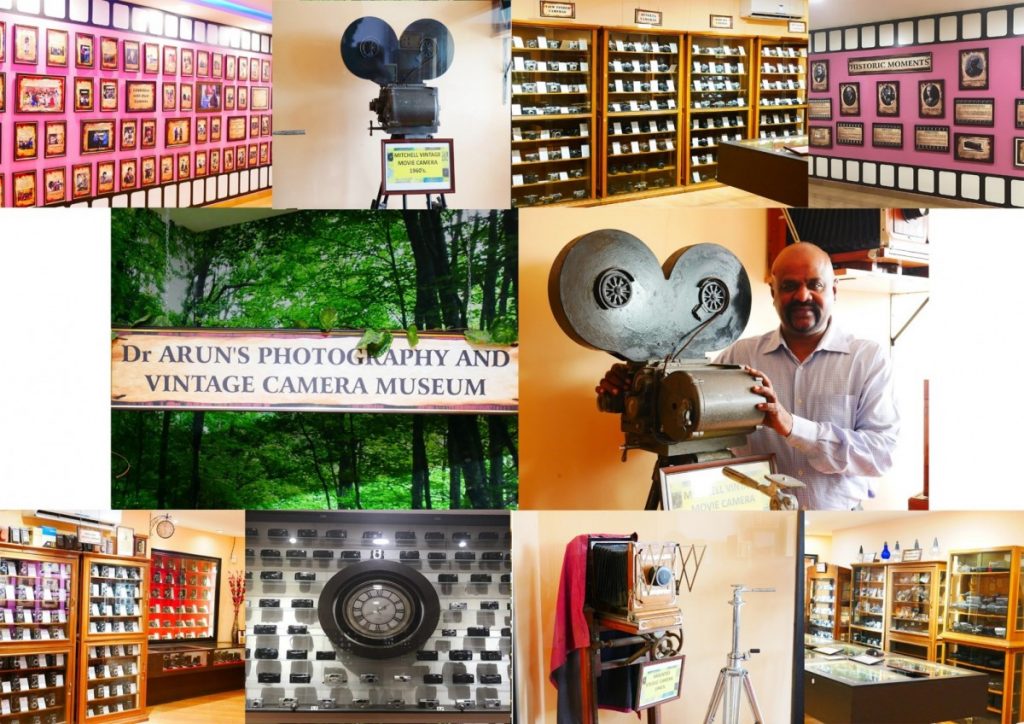 Many of us have a running love affair with cameras, old as well as new. Here a collection starts as a hobby then it turned into passion later which gonna create a huge buzz in Chennai city. The Museum Started by Dr. AV Arun (a dentist and professor of orthodontics) in 2013, Dr. Arun’s Photography & Vintage Camera Museum in ECR has been collecting vintage cameras since 1997. 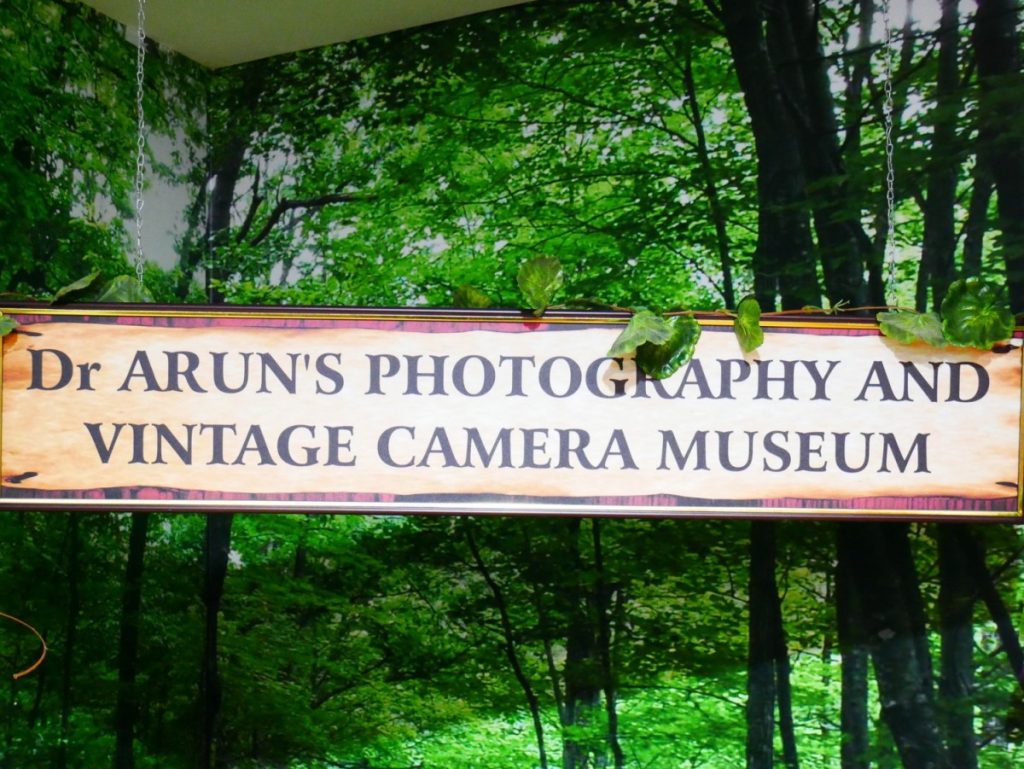 Dr. Arun came across two damaged Yashica TLR cameras in a flea market in Chennai. He bought both and dismantled one of them to understand the mechanism. Slowly this interest grew and he started to go through the history of cameras and found it to be interesting and fascinating. As time went by, he started picking up more and more cameras, and slowly the collection started to grow. Whenever Dr. Arun travelled out of the city or country, he made sure that he visited the flea markets, old camera dealers, and camera collectors to purchase from them. 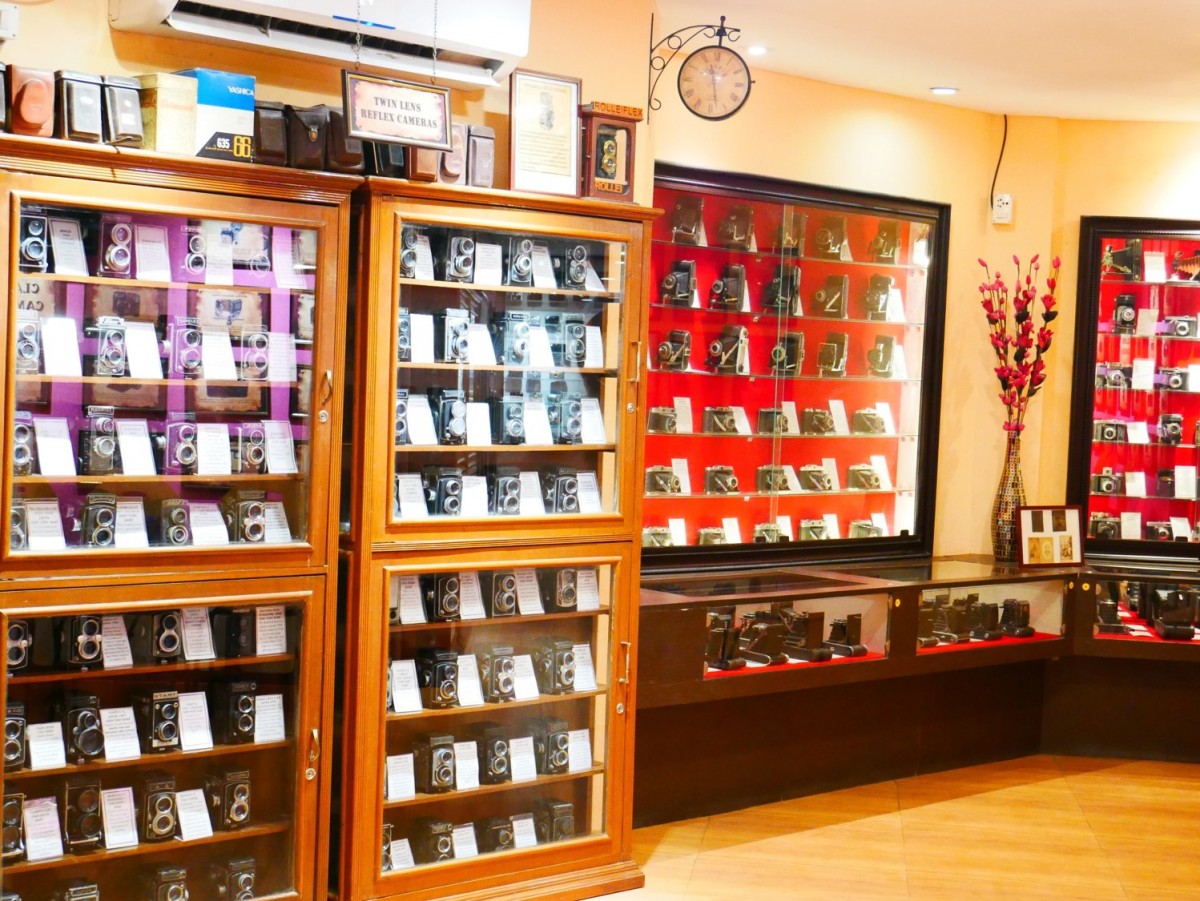 When Dr.Arun shared us with some memory of a collection of Cameras placed around his museum. A rare grey colored Yashica Model was thus obtained when an old lady gifted it to Dr. Arun, where the lady says that it was a beloved gift to her from her late husband. She wanted to it be preserved forever.

The museum was inaugurated on the 11th of January 2016 by the national award-winning and popular cinematographer Mr. P. C. Sreeram. 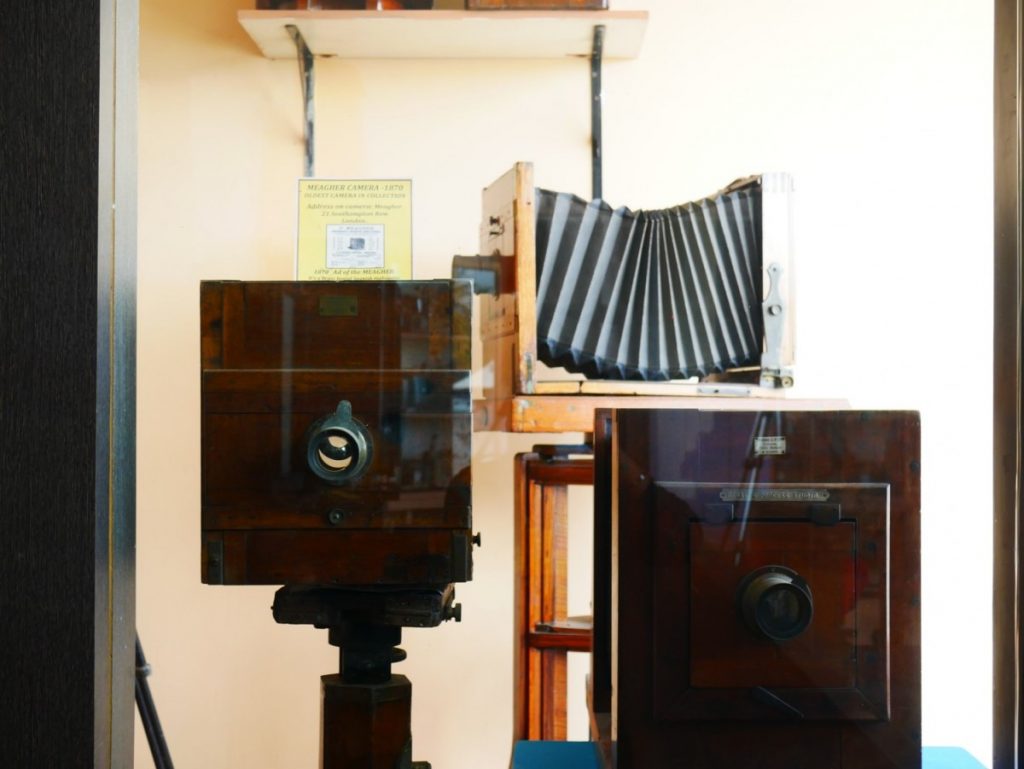 One step into the museum makes us travel to another time and world. Nostalgia hits you hard with the very first photograph wall, showcasing Chennai from the 60s and 70s. The museum’s camera collection ranges from the Meagher 1870 film camera, their oldest model to the modern digital cameras of today. Totally now around 2,900 Cameras are in the museum which has got more accolades to Dr. Arun.

Starting from Box Cameras from 1880 to 1940 and portable folding cameras from the 1900s, the shelves showcase age-old models like the Kodak Brownie, AGFA box, the Bessa, and Coronet Super flash, to name a few. There are also rare miniature cameras, which volunteers at the museum will let you hold so that you can look through these unbelievably small lenses. 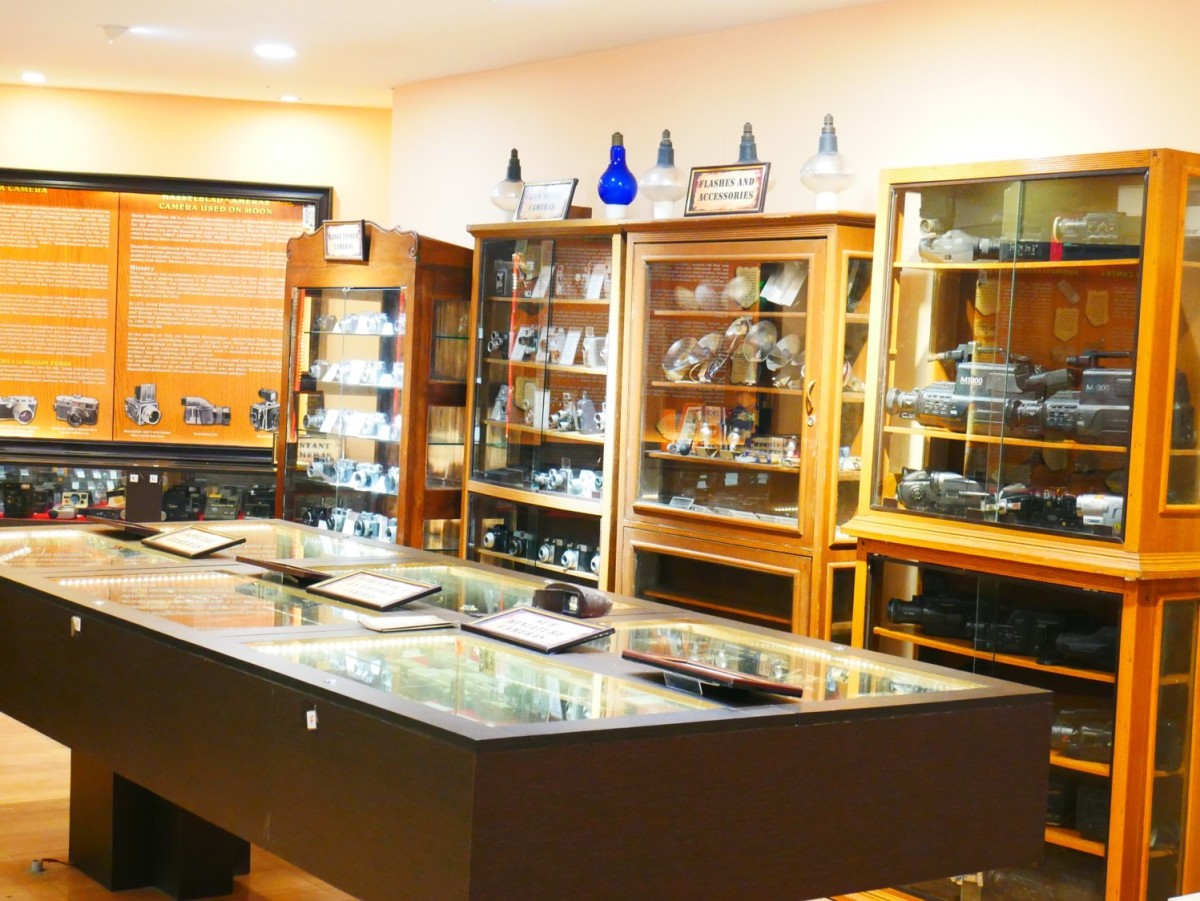 You can even find World War II US Air Force cameras on exhibit here. The most exciting camera here is the Zenit Fotosniper this sniper type camera is from the 1960s is said to have been used in Russia during the war. There are also different Polaroid models like the classy white Polaroid Swinger 20, known to be one of the first inexpensive instant cameras.

Personal Favourite Camera – Twin Lens Camera Yashica – B; That’s a very rare camera you can get to use it. Totally just 15,000 Cameras manufactured all over the world. Getting to see the camera in very perfect condition is rare. 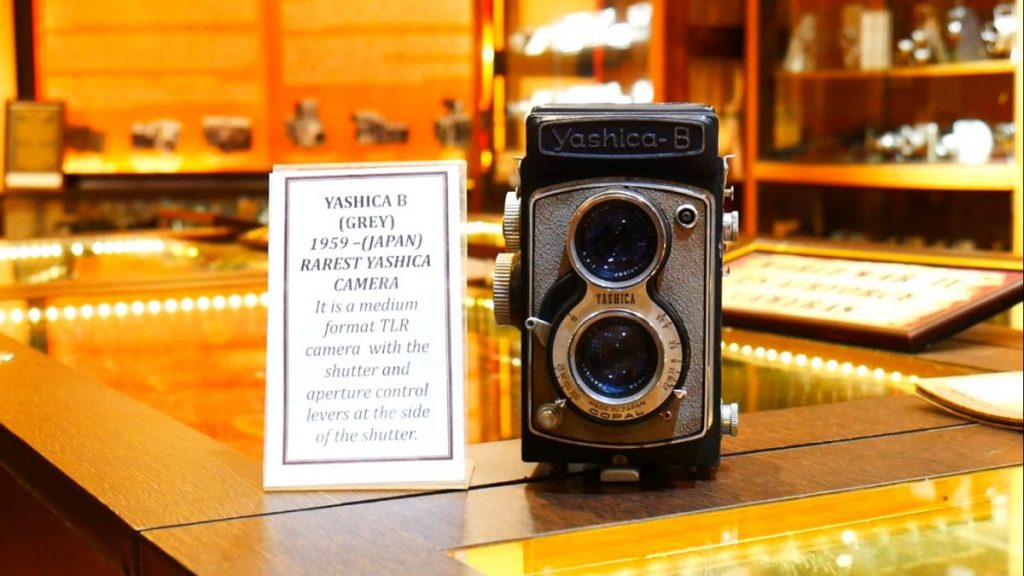 Largest Camera – It is a British Camera – 8 Feet long & 5 Feet Tall There are only two or three in the world.

Smallest Camera – Japanese Spy Camera – During earlier days before this digital era when technology was not implemented on our daily life basis. Spy Camera which is very small which is just 3 inches. It’s called HIT.

Oldest Camera – As the name says it all we have got a camera from the year 1870 which is being considered to be the oldest camera of all in the museum. 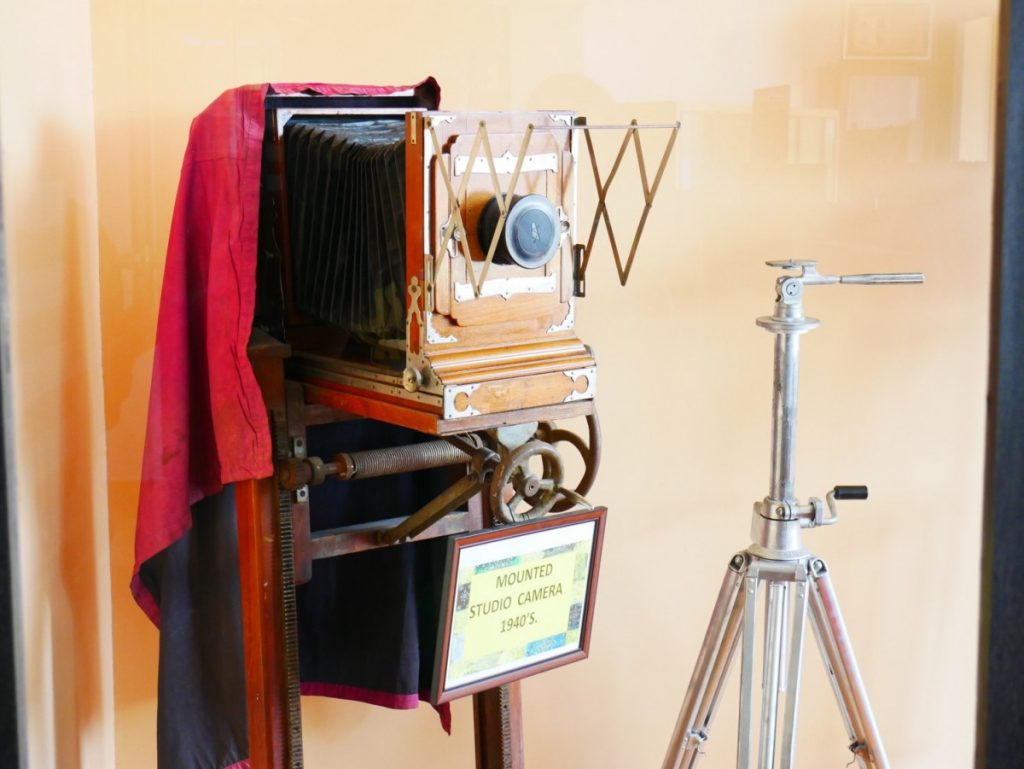 There were not just 8MM movie cameras, but the museum also has the Mitchell 33 mm Hollywood camera from the 1940s among other towering studio cameras. So the next time you’re visiting East Coast Road, we suggest that you drop by this camera paradise. 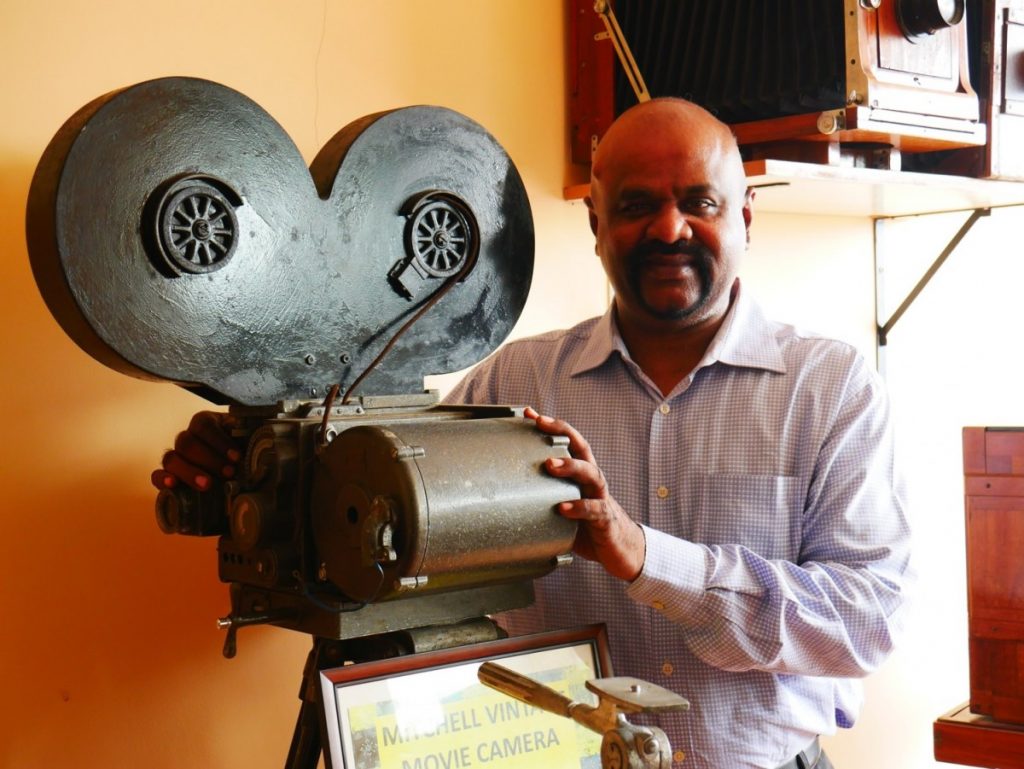 Dr. Arun has extensive knowledge about the history of photography. He delivers many lectures on the subject and the museum itself has a lecture hall to facilitate this. You could also donate cameras and add on to the museum’s awesome collection!

Chennai’s very own Camera Encyclopedia – When hobby became his passion. 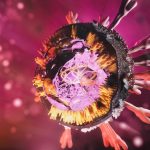 New Strains of COVID in the UK have initiated to... 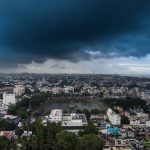